A Press Trip To Paris with Hermes

news / A Press Trip To Paris with Hermes 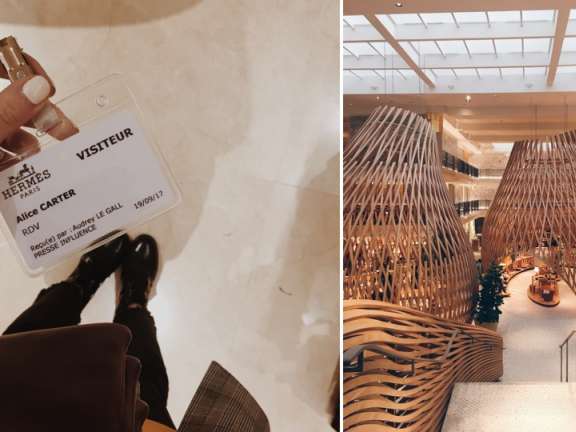 We were extremely lucky to visit Paris this week with the fantastic Hermès team and three top Manchester influencers ahead of their Hermèstastic launch in October.

Manchester will be hosting the UK debut of the Hermèstastic laundrette on King Street. The laundrette has previously been to Paris, New York, Kyoto and Dubai.

From Thursday, 5th October for 7 days, the launderette will play host to Hermès silk styling workshops, where their specially trained stylists will dip into the Hermès scarf collections and show you a myriad of ways to wear an Hermès scarf.

As part of the campaign we secured three top Manchester influencers Megan Ellaby, Alice Catherine and Sophia Rosemary to visit Paris with the team to discover the brand and get lost in the beauty of it’s silk pieces.

After a very early 2am wake-up call and lots of coffee we landed in Paris and headed straight for the Emile Hermes collection. A wonderland where you can explore Emile’s personal treasures, everywhere you look you can see inspiration that has filtered into their designs and silk scarves. It was an incredible privilege to visit the collection which can only be visited by invitation.

It was then time to visit the most fabulous Hermes concept store where we browsed the styles, fell in love with a lot of scarves and had a spot of lunch. The brand have recently launched their new fragrance Twilly which we tried out and proceeded to make a mental note to purchase!

Next stop was Hermes HQ. The chicest offices you have every seen everything is cream and orange with beautiful art perfectly placed on the walls. We headed to the design studios where we were extremely privileged to see some original designs from the past few decades for Hermes silk scarves.

It was then time for a styling masterclass where we got the chance to speak with designer Pierre Marie who has created 15 silk designs for Hermès each one more intricate and and beautiful than the next.

Press trips are always a brilliant way to immerse yourself in a brand and really allow press/influencers to gain a deeper understanding of the products. It was a fantastic opportunity to share our passion for the brand with Megan, Alice and Sophia.

Paris we will most certainly be back soon!