With Sound City Festival upon us, here’s the team’s must see moments at this year’s 10th anniversary special… 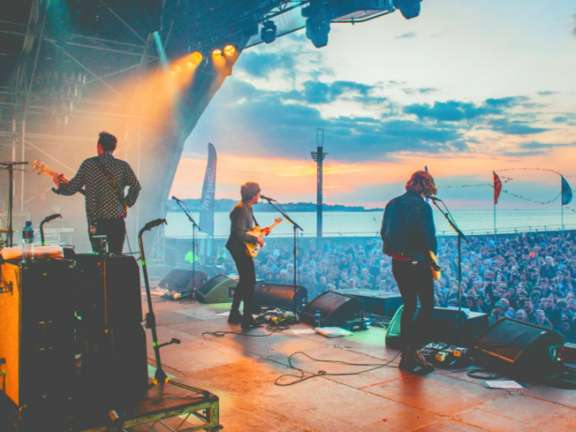 1: John Cale presents the only UK performance of the iconic Velvet Underground and Nico to mark it’s 50th year. To celebrate the most influential album of all time he has invited Clinic, Fat White Family, Gruff Rhys, Nadine Shah, The Kills and Wild Beasts to join him live of stage. Not content with curating the gig of the decade John will also be in conversation at Sound City on the Saturday afternoon – a once in a lifetime opportunity to hear about the birth of the Velvet Underground, his relationship with Lou Reed and his eventful career to date.

2: Synth-pop legends The Human League open this year’s festival on Thursday night headlining a bill comprised of the cream of the UK’s electronic pioneers including Art of Noise featuring Dudley/Jeczalik/Lanagan – their first live show in 25 years – andA Certain Ratio. These three bands playing the post-industrial landscape of Liverpool Waters? Unmissable!

3: Sound City+ is the sister event to the main festival. Originally a music industry conference, Sound City+ is now open to everyone with an interest in the industry from students to the plain curious and is chock full of fascinating panels, workshops and talks from luminaries such as Ramones manager Danny Fields, PiL bassist Jah Wobble, DJ legend Andrew Weatherall and Veteran DJ, filmmaker and founding member of Big Audio Dynamite, Don Letts. It’s the perfect networking opportunity for those who want to break into the business or just want to hobnob with the cognoscenti.

4: The overseas showcases have always been a highlight at Sound City – the festival is committed to presenting the best new talent the world over – and this year is no exception with POP Montreal presenting the best of the Canadian crop with off-kilter pop from Mozart’s Sister and Congolese cross-over stylings of Afro/Canadian singer Pierre Kwenders while the South Korean contingent features the astonishingly authentic retro girl band The Barberettes and power-pop trio The Monotones who won ‘Best Rock Album’ at last year’s Korean Music Awards. Interesting and above all lots of fun and who knows? Maybe you’ll stumble across the next global sensation.

5: The live lineup! This year’s bill is enormous – more than 200 live bands – but you would be foolish to miss stand-out performances from Metronomy, The Kooks, The Kills, Peaches, Local Natives and Chk Chk Chk. Sound City was also crowned best festival for emerging talent last year and is duly presenting some of the very best new acts from across the UK including Be Charlotte, The Amazons, Dapz On The Mapz, Jalen N’Gonda and The Japenese House. It’s one of the biggest and most diverse live bills of the year.

6. The Tim Peaks Diner always delivers – not only a damn fine cup of coffee but a smorgasbord of eclectic musical delights including The Rhythm Method, Tom Mouse Smith and Nev Cottee. Tim Burgess himself will also be joined by Charlatan’s guitarist Mark Collins for a very special performance on Sunday. It’s the ultimate festival oasis.

7. What’s a festival without the crazy late night parties? Sound City is famous for them and have raised the bar for the tenth birthday. Want to step out blinking into the early morning light with a big smile, a full heart and a fuzzy head? Then don’t miss Aristophanes, Formation, YOTA, Slang and more at the Invisible Wind Factory and North Shore Troubadour, the coolest underground club spaces in the 10 Streets development area and just two minutes walk from the festival site.

8. Processions are great but they’re greater still when they’re full of fire and the loudest drumming known to man! The Fire Project and Katumba will be leading the dazzling cavalcade through the festival on Sunday night with a spectacular crescendo at the Cavern Stage.

9. Some festivals can get a bit blokey. Not Sound City, especially not this year with the ‘You Spin Me Right Round’ panel in Tim Peaks Diner that explores hot topics from gender bias/norms in music to queer culture and all points between with heavyweight speakers Queen Zee and The Sasstones, Jayne Casey (Big in Japan) plus an in conversation at Sound City+ with controversial performance artist and rockstar Peaches.

10. If you’ve partied too hard and a bit of R&R is required then The Martini Lounge will certainly provide a restorative effect. Witness burlesque as you have never seen it before with the raunchiness of Millie Dollar and acrobatics from the amazing Edd Muir – ‘The Diet Coke Man’ – in the most comfortable of surroundings.