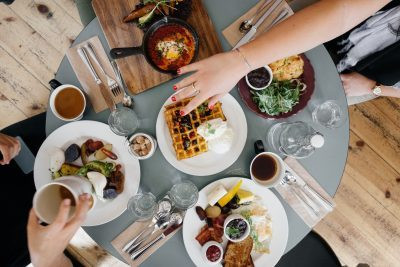 There are two types of people: those who eat to live, and those who live to eat. At Carousel, we definitely fall into the latter with our office fruit bowls and snack table regularly full of treats from all over the world. But what will be on our shopping lists this year as we look ahead at 2018’s trendiest foods.

Over the last few years, the food industry in the UK has grown away from its staples and beloveds of Marmite, shortbread and heritage brands and become a world leader in setting trends for the restaurant scene. London, once perceived to be one of the worst places to dine in save for a few of the real stalwarts (River Café, Moro, Ottolenghi, looking at you), has become a hot bed for new openings, single menu pop ups, world class food markets and world talent.

Return of the Mac (and cheese)

Mac and cheese: arguably the most instagram friendly video you can watch is a string of cheese stretching out of a perfectly golden, cheddar laden, macaroni mountain, right? Well you’re in luck, because the rise of carbs on the menu is set to continue. Carbs, previously demonised, are being promoted from everyone from the government to Harrods who have just opened a bakery dedicated to gluten based goods. Pasta was the dish of the day for many chefs too with Padella awarded a Bib Gourmand and Stevie Parle opening Pastaio to much acclaim since launching in December. Alternative carbs such as quinoa, bulgar wheat, faro and ancient methods of making bread are proving popular too, with a heavy influence on artisan unrefined ancient flours.

2017 was the first year ketchup sales were taken over by mayonnaise in the UK. Condiments are big news for millennials, from truffled mayo, baconnaise and ‘posh’ ketchups made with beetroot and low in sugar, drowning your roast dinner in condiments might not be as frowned upon quite as much as previously. If you do still want to see some really pitiful roast dinners however, there’s this hilarious account you can follow to make you feel better about yours…

No longer thought of as sad or embarrassing, dining alone is another trend on the rise with single bookings at restaurants more easily catered for. Restaurants are opting for more communal seating, casual settings and binning the white table clothes. Little human interaction whilst you work, scroll or read are made even simpler with eateries where you can order via your phone and even pay that way too. Restaurants are acknowledging that traditional mealtimes are changing, with over 9% of the population eating at a restaurant alone more than once a week.

The new darling fruit of 2018 are figs! Cocoa nibs and dragon fruit? So last season, but figs are set to take social by storm. These jammy little fruits are going to be incorporated in salads, desserts, buddha bowls and of course, wrapped in prosciutto and served at your intimate dinner parties all year

Talking of dinner parties, gone are the days of set tables, silver sparkling cutlery and elaborate 3 course meals cooked for your friends. Instead, chilled out gatherings or pot luck parties with everyone sharing, using fingers and getting stuck right in with the emphasis on sharing is more en vogue. Sales of finger food, mezzes and deli dishes are up by 67% with the highest rise amongst millennials.

Waste not want not

Plastic is bad news for 2018. Good job as it’s been leaving a bad taste in our mouths for quite a while. Wetherspoons and Wahaca have both phased out straws whilst there’s more emphasis on cooking with whole vegetables by making stocks or bone broths. Shopping as and when you need it as opposed to the traditional weekly shop, has also become more popular, especially in the larger cities, with more people doing top up shops or deciding what they will have for dinner an hour or so before they eat. People are now 7% more likely to ask for a doggy bag at a restaurant compared to 10 years ago too, so if there really isn’t room for dessert, it might make the perfect midnight snack

Veganism, protein alternatives and plant based eating rose by 400% this year with record members identifying as vegetarian. Even more of us adopt a flexitarian approach only opting to eat meat once or twice a week. Restaurants and supermarkets are piggybacking on the trend, with Tesco releasing vegan ready meals this month. Veganism is no longer reserved to the hippie stereotype it once held. Bundobust, with branches in Leeds and Manchester, was applauded by critic Jay Rayner and is completely vegetarian whilst food darling, Gizzie Erskine, opened her Vegan pop up Pure Filth, which sold out. Jack fruit has also seen a boost in popularity. The once stigmatised fruit which has a pungent smell, is now a staple for foodie vegans making pulled pork style tacos or vegan fried chicken. Expect to see more options at your local Saino’s and don’t always expect your steak to be beef, it could be cauliflower!

Indian small plates continue to be the order of the day with Kricket going from a pop up restaurant in a shipping container to having prime location in Soho, Darjeeling Expressone of last year’s stand out openings, Dishoom opening even more restaurants with one to come to Manchester in the next few months and Indian Accent opening to 5 star acclaim in London. This year though, African food is hotting up. Championed by Zoe Adjonyoh of Zoe’s Ghana Kitchen fame who had one of the best selling books last year, and Ikoyi recently opening in St James, get to grips with knowing your fufu (African grain) from your injera (Ethiopian sour flat bread).

Knew that all already? Course you did Gordon Ramsey, but how many of these foodie essentials for the year do you have in your larder?

For more interesting stats and figures to digest, check out the Waitrose Food Report here and predictions from food world celebs here

All that has made me peckish…